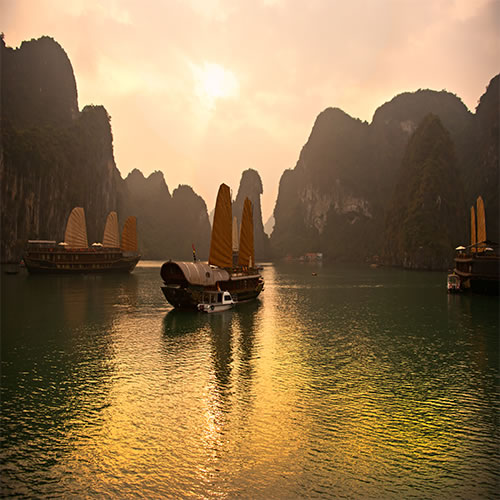 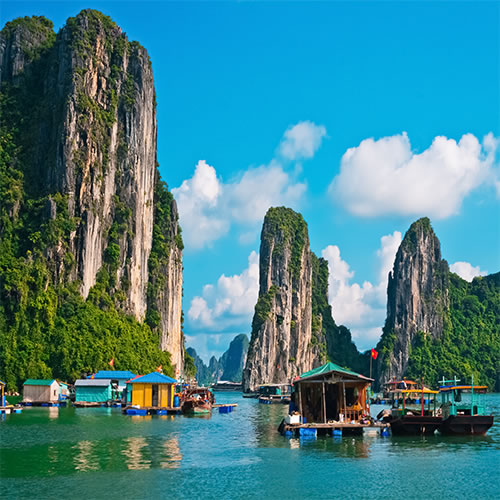 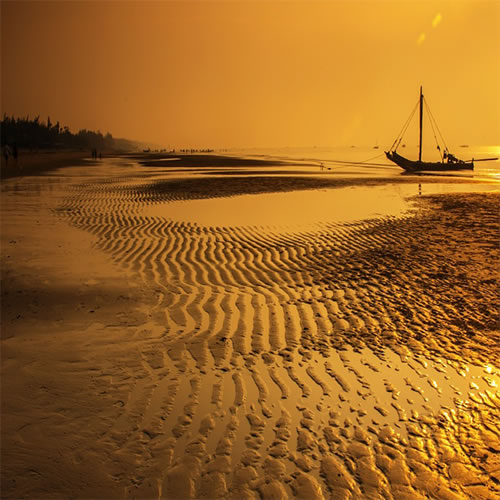 Asian Culture Heritage!!!...Explore Bangkok, famous and appreciated by visitors for its versatility and multiple attractions such as temples likeThe Grand Palace or 'Chatuchak', the largest shopping center and largest outdoor market in Asia. Then fly to the energetic Hanoi, a city that is considered one of the main cultural centers of Vietnam, and visit their prominent Temple of Literature or their many museums around the city. Then enjoy Halong Bay, cruising onboard their extraordinary and unique ships and sail away through the magnificent Halong Bay River, a UNESCO World Heritage Site, and enjoy the spectacular and breathtaking scenery of this imposing place. Finish your trip in Siem Reap featuring another UNESCO World Heritage Site such as the 'Angkor Wat' containing the magnificent remains of the Khmer civilization.

The best of Asia! Start your trip in Hanoi, home to a number of must-see attractions that provide visitors with entertainment, beauty and culture at different turns. Visit the Imperial Citadel of Thang Long (a UNESCO World Heritage Site) and then enjoy a traditional water puppet show at the world-famous Thang Long Water Puppet Theatre. Combine this exciting trip flying into Halong Bay and discover such as a magnificent work of the Mother Nature. Take a cruise boat through the bay to maximize this marvelous experience, make sure to include Sung Sot Cave in your itinerary, Bai Tu Long Bay is also absolutely not to be missed. Up next is Siem Reap, the gateway to Angkor Wat and the rest of the Angkor Ruins, a UNESCO World Heritage site. But that's not all you can do in Siem Reap, do not miss the opportunity to visit the Tonle Sap Lake or to explore Pub Street. Continue your trip in Khao Lak, bursting with natural scenery, exotic tropical beaches, lush tropical parks and breathtaking waterfalls. Last but not least is Bangkok, known as "The Venice of the East", where many activities such riding a Tuk Tuk along Chinatown or riding a boat thought the floating market are seen in every step you make around this cheerful and enjoyable city. A trip to Bangkok is not complete without a visit to the stunning Grand Palace, Wat Pho and Wat Arun, the latter offers memorable sunsets. This is a flexible vacation package. Select your number of nights in each city, desired hotel and activities.

Remarkable Indochina!!!...Fly to the lively and spirited city of Ho Chi Minh, a town that features The Jade Emperor Pagoda; a religious place that is considered to be one of the most spectacularly atmospheric temples in this City. The trip continues in the astonishingly beautiful Hue, where the Imperial City is a must see due to its grandeur. Then fly to Hoi An, recognized as a World Heritage Site by UNESCO for being a well-preserved example of a Southeast Asian trading port, with buildings that display a unique blend of local and foreign influences. Along the trip you will visit Hanoi, which is considered to be one of the most beautiful cities in all Asia thanks to its tree-fringed lakes and ancient pagodas. Then enjoy Halong Bay, cruising onboard their extraordinary and unique ships and sail away trough the magnificent Halong Bay River, a UNESCO World Heritage Site, and enjoy the spectacular and breathtaking scenery of this imposing place. Then comes Luang Prabang, known for its many Buddhist temples and monasteries where every morning, hundreds of monks from the various monasteries walk through the streets collecting alms. Finish your trip in Siem Reap, a strikingly memorable place that will take you back on time and offer you a pick of the ancient Khmer civilization thanks to their many Angkor temples.

This is a flexible vacation package. Select your number of nights in each city, desired hotel and activities.

Browse all 61 customizable packages  or  Build Your Own Itinerary