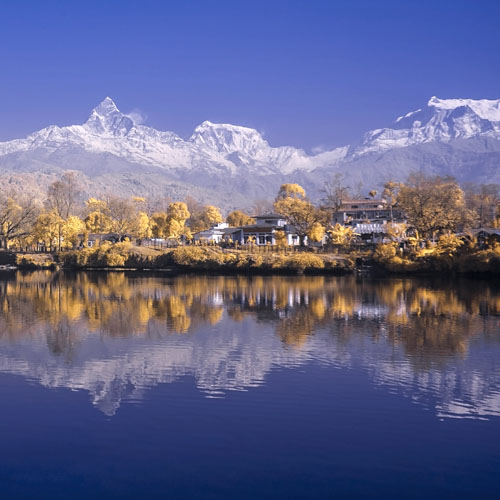 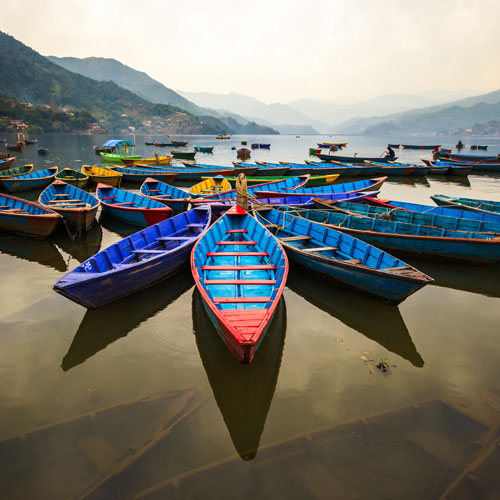 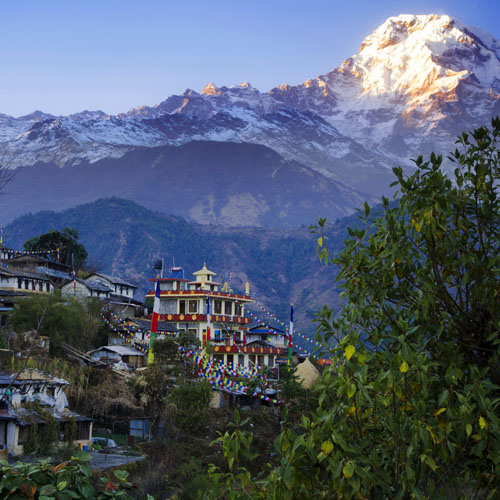 Located in the middle of Pokhara valley on the banks of the Seti River, Pokhara is the center of adventure of Nepal - the perfect starting place for hikers and trekkers. The serenity of Phewa Lake and the magnificence of the summit of Machhapuchhre (22,890 ft) rising behind it create an ambience of peace and magic. The valley surrounding Pokhara is home to thick forests, gushing rivers, emerald lakes, and of course, the world famous views of the Himalaya.

City of Temples and The mirror to the Himalaya. Begin this amazing guided experience flying into Kathmandu, get amazed by its fantastic tourist destinations including Boudhanath Stupa which is the largest Buddhist monument, and Pashupatinath Temple which is one of the most sacred Hindu shrines in the world. Then drive south east of Kathmandu towards Kathmandu Valley and visit Bhaktapur which is now like an open air museum, moreover you will be able to visit the renowned Durbar Square, Golden Gate, and Potters Square. Combine this fantastic adventure driving to Pokhara, spend time visiting this beautiful hill town in the foothills of Himalayas, and do not miss enjoying the fascinating views of Annapurna range including the fish tail peak of Machapuchare. After enjoying your guided tour you will be driven back to Kathmandu. This is a flexible package. Select your number of nights in each city, desired hotel and activities.
Included:

Fascinating India and Nepal!...Begin your vacation in Delhi, this megapolis is dotted with spellbinding mosques, forts, and monuments from the Mughal. Then fly to Kathmandu, a city filled with rich history, religious events and cultural celebrations. Here you can visit Boudhanath Stupa, meaning the 'Lord of Wisdom'. This Tibetan Buddhist monument is the largest stupa in Nepal and one of the largest in the world. Also visit Pokhara, surrounded by beautiful snow-capped mountains, with a magnificent lake of crystal-clear Himalayan water. After enjoying your guided tour you will be driven back to Kathmandu. This is a flexible package. Select your number of nights in each city, desired hotel and activities.

SUNDAY DEPARTURE ONLY. Combine Mumbai (known as "the city of dreams", packed of an array of sightseeing spots such as the Gateway of India, Taj Mahal Palace, Chhatrapati Shivaji Terminus and Elephant Caves. A trip to Mumbai is not complete until you visit the Marina beach and its colorful markets and bazaars), Bangalore (one of the five biggest Metropolitan cities of India. Its fast development has attracted multinational corporations. While here, visit the Palace of Tippu Sultan, the Bull Temple, the Indian Institute of Science, Cubbon Park, and the magnificent Lal Bagh botanical garden. The diversity of cuisine available reflecting the social and economic diversity of Bangalore is another of its attractions), Hassan, Mysore, Delhi Agra (and discover their enchanting attractions visiting magnificent structures such as Chandni Chowk Market, one of the oldest and busiest markets; Humayuns Tombs, first example of Mughal architecture and tomb of Mughal Emperor Humayun; Lotus, one of the most visited buildings in the world;India Gate, is a war memorial and first gate constructed; Qutub Minar, second tallest minar in India and UNESCO World Heritage Site) and Jaipur. This is a flexible vacation package. Select your number of nights in each city, desired hotel and activities.

Pokhara
Map of Point of Interest

Browse all 5 customizable packages  or  Build Your Own Itinerary