Cape Verde, a chain of islands off the western coast of Africa, were unpopulated until the Portuguese colonized it in the 15th century, and Portuguese colonial influence can still be felt today. Sao Vicente and Sal are the two principal islands in the chain: Sao Vicente is home to the country`s two largest cities and tourism centers, Praia and Mindelo. Sal Island, known for its white sandy beaches, is one of the most wondrous island destinations to explore, starting with Santa Maria and traveling north to its capital, Espargos. 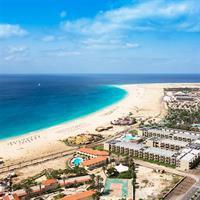 See All Cities in Cape Verde 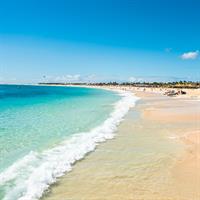 Witness Egypt, Morocco and Cape Verde with this spectacular adventurous vacation package. Visit Cairo (capital of Egypt, and famous for its own history), Casablanca (vibrant metropolis with the awe-inspiring Hassan II Mosque) and Cape Verde. These destinations are connected by flights. This is a flexible vacation package. Select your number of nights in each city, desired hotel and activities.

A vacation package sure to leave you breathless, visiting Portugal, The Cape Verde and Morocco. Start in Lisbon (the dazzling capital with an ancient fortress, charming neighborhoods with local culture and festivals), after that, take a flight to Sal Island (with golden sandy beaches sinking into azure waters, windows into the island’s past and some truly spectacular natural phenomena to admire) and, finally, catch a last flight to Casablanca (vibrant metropolis with the awe-inspiring Hassan II Mosque - the largest in Morocco). This is a flexible vacation package. Select your number of nights in each city, desired hotel and activities.

A wonderful combination of stunning cities in Morocco and Africa . Combine Marrakech (with several historic and architectural sites, as well as some interesting museums), Casablanca and Cape Verde (officially the Republic of Cabo Verde, is an island country in the central Atlantic Ocean). Take a flight between them for convenience. This is a flexible package. Select your number of nights in each city, desired hotel and activities.

Adventure awaits you with this customizable package offering an unforgettable experience in UAE, France and Cape Verde. Visit Dubai (where traditional eastern influences meet with the modern comforts of western culture), France (the city of Lights) and Sal Island. These destinations are connected by flights. This is a flexible vacation package. Select your number of nights in each city, desired hotel and activities.

Browse all 5 customizable packages or Build Your Own Itinerary