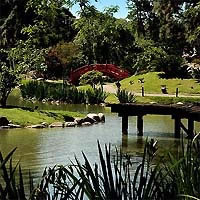 On first glance, this working and middle-class neighborhood seems to offer little of interest to tourists. However, it's steeped in Buenos Aires history. This is where tango crooner Carlos Gardel grew up and lived as an adult. Vestiges of that time period include the Abasto Shopping Center, once an open-air market, on Calle Corrientes, where Gardel sang to the vendors as a child and first became famous. The tango show palace Esquina Carlos Gardel was built over a bar he frequented, and his home on Calle Jean Jaures is now a museum. 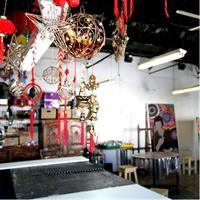 This emerging neighborhood in the south of Buenos Aires borders La Boca and San Telmo. For years, tourists visited only for its famous tango show hall Señor Tango. The neighborhood has the reputation of being dangerous, though the recent influx of artists and young people due to rising housing prices in surrounding areas has caused gentrification. A number of the warehouses and barracks from which the neighborhood takes its name are being converted into luxury apartments and art centers. Businesses here often claim to be in San Telmo. 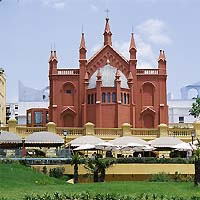 This neighborhood borders Recoleta, and many consider it to be part of Recoleta. However, while the two are physically similar, Barrio Norte is busier and more commercialized, with shops primarily aimed at a middle- and upper-middle- class clientele. If anyone ever describes to you a place allegedly in Recoleta but with convenient subway access, it's actually in this neighborhood. Most shops are located on Avenida Santa Fe, which is serviced by the D subway line. This area was historically home to much of the city's homosexual population and services, but that is changing over time as venues spread across the city, especially to San Telmo. 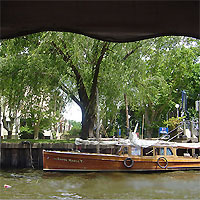 You'll probably be in Buenos Aires for a long time before you venture out to Belgrano, a well-to-do neighborhood in the north of the city, beyond Palermo. Its main feature is its barrancas, a series of hills in the center of the neighborhood and an enormous waterfront park, which is an extension of those in Palermo. While tiny, this is where you'll find Buenos Aires's Chinatown, near the intersection of Arribeños and Mendoza, close to the Belgrano train station. 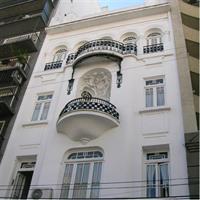 The western side of the Avenida de Mayo surrounds the enormous Congreso building looking out over Plaza Congreso. Though the building and plaza are significant and famous attractions, the neighborhood itself has a run-down feel. Things are beginning to turn around, however, and a large number of hotels have opened in this area, though they are not as renowned as those in some of the more sophisticated parts of the city. To the north along Callao, you'll come across blocks of deteriorating marble and stucco neoclassical architecture that bring to mind Buenos Aires's prestigious days and Argentina's desire to rise as a global power. 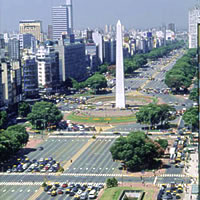 The Obelisco at the crossing of Avenida Corrientes and Avenida 9 de Julio is the defining characteristic of this flamboyant neighborhood. Avenida Corrientes, broadened in the 1930s on both sides of Avenida 9 de Julio, is lined with the city's most valuable theaters and movie palaces, Buenos Aires's answer to New York's Broadway. The world-acclaimed Teatro Colón sits about a block away. Although most of the action is at night, some theaters are worth meandering into during the day as well, in particular, the Teatro San Martín, which has continuous exhibits. Starry-eyed hopefuls from the provinces still flock to the area on their quest for fame, just as Evita Peron once did (her first Buenos Aires apartment was in this district). 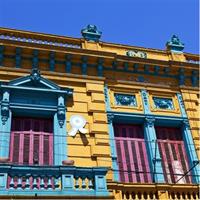 This is Buenos Aires's active downtown core, home to many of the hotels, banks, and services that make the city tick. The area's defining component is the pedestrianized Calle Florida, which runs from Avenida de Mayo to Plaza San Martín. The plaza provides a serene relief from this very compact center. On its boundary sits Retiro Station, once among the most crucial points of entry into Buenos Aires from the provinces. 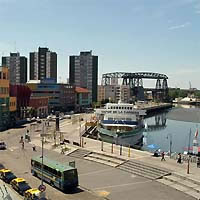 Historically, La Boca is Buenos Aires's Little Italy, the neighborhood of Italian immigrants who came to Buenos Aires in the late 19th and early 20th centuries. The centerpiece of La Boca is El Caminito, a pedestrianized roadway lined with buildings painted in brilliant colors, memorials and statues describing the neighborhood history, and stores selling souvenirs. Be aware that the area is considered exceedingly dangerous at night. When the shops close up, you should head out. There is no convenient subway that connects to La Boca. 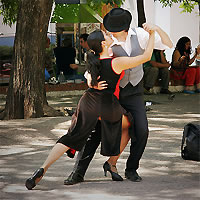 Sitting amid San Telmo and the Plaza de Mayo, this area is often grouped with San Telmo, though it's a distinct district of its own. It's home to some of the city's earliest churches, and numerous government buildings have been constructed here as well. Some are beautiful old Beaux-Arts structures; others, built in the mid-20th century, exemplify South American Fascist architecture, with their smooth, gigantic walls of dark polished marble and granite and heavy, pharaonic bronze doors. Many unions have headquarters here so they can more readily communicate with government officials. To some Porteños, this neighborhood extends up the historic Avenida de Mayo toward Congreso; others call this area San Cristóbal. Parts of Monserrat are barren and possibly dangerous at night. 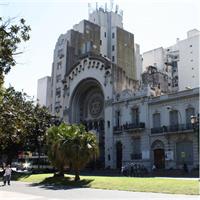 The name of this neighborhood is an abbreviation for Once de Septiembre, taken from a train station that memorializes the death of Domingo Faustino Sarmiento, President of Argentina from 1868 to 1874. Once borders Abasto and has a comparable history and feel. It is historically a Jewish neighborhood, and Calle Tucumán specifically still retains many Jewish businesses and kosher restaurants. 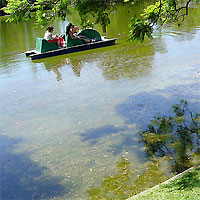 This broadly described district truly includes a number of smaller neighborhoods: Palermo proper or Alto Palermo, is home to the city's extensive park system; Palermo Chico, is an exclusive neighborhood of luxurious mansions located off of Avenida Alcorta; up-and-coming Palermo Viejo, encompassing Palermo Soho to the south and Palermo Hollywood to the north; and Las Cañitas, a fashionable area of restaurants, bars, and shops adjacent to the city's most famous polo field, Campo Argentino de Polo. 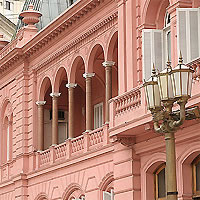 This is not so much a district as the historical and civic center of Buenos Aires, designed by Don Juan de Garay in 1580 during the second founding of the city. The plaza is enclosed by government buildings and the Catedral Metropolitana, which dates back to the late colonial era. The plaza's defining component is the Casa Rosada (Presidential Palace), home to Evita Peron's famous balcony. This plaza is the main site of political demonstrations and a shelter area for the homeless and the piqueteros (demonstrators) who often camp out here at night. The most important ongoing demonstration is that of the Madres de Plaza de Mayo, which takes place every Thursday at 3:30 pm and is a must-see for those who understand the country's tragic history. 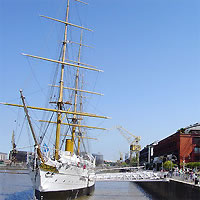 Once a broken-down port, the area northeast of Plaza de Mayo is now brimming with plenty of restaurants in renovated warehouses. Offices, high-rise residences, and luxury hotels are slowly popping up as well. The district can feel cold and antiseptic by day because of its far-reaching expanses and new construction, so you might want to come at sunset when the water in the port glows a fiery red and the city skyline is silhouetted. The closest subte stop is Alem, on the B line, and a new tourist train runs the length of Puerto Madero, but walking is usually the fastest way to get around. 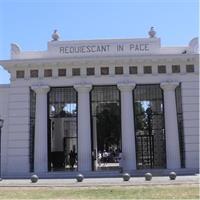 The name of this neighborhood comes from a classic Spanish word meaning "to remember." Its history dates all the way back to the late colonial period and the installation of a convent where Recoleta Cemetery, Evita Peron's final resting place, now sits. Once on the edge of Buenos Aires, Recoleta is now one of the most exclusive shopping and residential neighborhoods. Marble buildings reminiscent of Paris and green leafy streets define this area. Avenida Alvear, dignified by the city's most acclaimed hotel, the Alvear Palace, is lined with luxurious showrooms (some in buildings that were once the homes of the city's most wealthy residents) from the most impressive designers. There is no convenient subway access to this neighborhood. 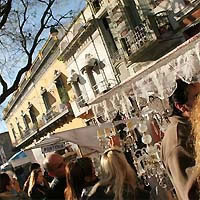 If you think of tango, romance, and a certain unexpressed sensual sadness when you think about Buenos Aires, then you are thinking of San Telmo. This is one of the city's oldest neighborhoods, once the home of the extremely wealthy until the 1877 epidemic of yellow fever caused many to flee to newly developing areas north of the city center. The center of San Telmo is Plaza Dorrego, the city's second-oldest plaza (after the Plaza de Mayo). This neighborhood is a favorite to many, mostly at sunset when the buildings glow gold and their ornamental tops become silhouetted against the sky. Many Porteños still think of the neighborhood as dangerous, but rapid renovation has changed it drastically in recent years. Still, take caution at night, just as you should anywhere. 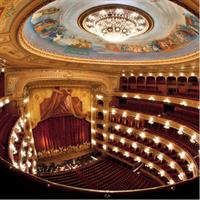 The centerpiece of this neighborhood is the Argentine Supreme Court, from which the area takes its name (Palacio de Tribunales). This impressive building, overlooking Plaza Lavalle, is not ordinarily open to the public, but if you can sneak in, it is well worth a look. For tourists, the most important feature of this neighborhood is what sits across the plaza, Teatro Colón, the city's supreme cultural center, also in the middle of a serious and deliberate overhaul.