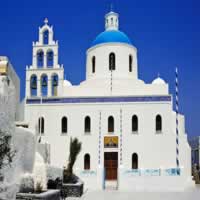 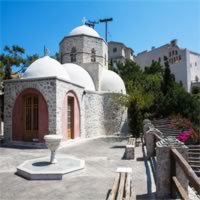 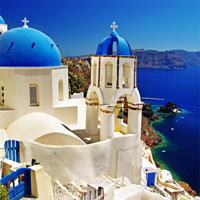 The Monastery of Agios Nikolaos

The historical female Monastery of Agios Nikolaos is located between the villages of Firostefani and Imerovigli. The monastery is dedicated to three saints, Agios Panteleimon, Zoodoxos Pighi (which means life giving source in Greek) and Agios Nikolaos. This monastery was originally founded in December 6th in 1651 and it was the second monastery built in Santorini. The Gizi family, one of the few Orthodox families who lived inside the Venetian Castle of Skaros, decided to turn their private chapel into a monastery, which eventually remained on that position till 1815. That year, the archbishop of Santorini gave permission to move the monastery to its present location, where the small chapel of Zoodohos Pighi was located. The construction of the new monastery lasted till 1820.

Today, the large halls of the Monastery of Agios Nikolaos host a folklore museum and an ecclesiastical museum with rare Byzantine icons. The icon of Agios Nikolaos, in particular, is very important and so is the wooden iconostasis of the katholikon, the main church of the monastery.

The Church of Holy Cross

Located in the central square of Perissa, just above the beach, the church of Holy Cross is among the largest churches in Santorini. It was originally constructed in 1835-1840, but after the severe earthquake of 1956, the church was reconstructed. This reconstruction revealed the foundations of two three-aisled basilicas, which shows that the original church was constructed on top of them. Unfortunately these two basilicas had been totally ruined. Today the church of Holy Cross distinguishes due to its large bell tower, the blue dome and the impressive size. It celebrates on September 14th with a large local panigiri.

The Church of Panagia Episkopi

Built in the 11th century in the area of Mesa Gonia, it has survived many invasions and earthquakes but it is well-preserved to this day. You reach it up a bumpy road and close can admire the orange tile roof and notice the faded front. Initially the church was used as an Orthodox Metropolis and during the Venetian times, the church belonged to the Catholics. It finally returned to the Orthodox people. Today, the church hosts many interesting frescoes and holy icons from 11th and 12th century.

The Monastery of Holy Trinity

The Monastery of Holy Trinity (Agia Triada) is located in Pyrgos village, on the southern side of Santorini. Constructed in the traditional architectural style, the white color dominates in this monastery complex. Today it houses a small Museum of icons and Ecclesiastical Relics inside. The museum showcases the long religious tradition of Santorini island, exhibiting valuable Byzantine icons, made by local or Cretan painters, as well as ceramics, woodcarving works and ecclesiastical clothing and objects dating mostly from the 17th and the 18th centuries.

The Church of Panagia Katefiani

At a high altitude of 650 feet on the slopes of Mesa Vouno Mountain, on the southeast coast of Santorini lies the beautiful tiny chapel of Panagia Katefiani. This small church, built on a huge rock, was used in the past as a refuge for the locals in times of war and pirate attacks. Set in a fabulous location overlooking Perissa and the south coastline of Santorini, the chapel provides a breathtaking view to the Aegean Sea. Behind the chancel, there is a small cave with an ancient fountain whose water is believed to have therapeutic effects. Panagia Katefiani celebrates on September 8th, the day of Virgin Mary`s birthday. It is located on the way from Perissa to Ancient Thira.

The Monastery of Prophet Elias

The Monastery is built on the highest peak of Santorini, at 1,900 feet above the sea. This Monastery is one of the oldest of Santorini as it was built in 1712. It is found between Pyrgos and Kamari villages and the road passes through rocky landscapes and vineyards. Trekking there is a nice experience as you can enjoy all the natural beauty of Santorini. This monastery played a major role in the economic and cultural life of the island. Built in the style of a fortress, the monastery used to own a ship in the 18th century, which carried out trade with the rest of the Aegean and the Mediterranean, bringing prosperity to the Monastery. In the first half of the 19th century, it ran a school of Greek language and literature. The monastery started to decline in the 1860s and suffered much destruction in the strong earthquake that hit Santorini in 1956. Today the Monastery of Prophet Elias hosts an important collection of rare ecclesiastical items, hand-written books and Byzantine icons. It also has workshops on printing, shoemaking and candle making. The monks also deal with wine making. The yard of the Monastery offers excellent and breathtaking views of the whole island of Santorini.

The Dominican convent is ideally located in the predominantly catholic quarters of Fira, right at the town center. The Convent hosts twelve nuns of different nationalities. It is a much-venerated convent for people belonging to the Christian faith. Inside the Convent, there is a church, the Rozario Church, which is conspicuous by its marvelous traditional architectural brilliance. The church`s baroque features have attracted the attention of historians and archaeologists. In fact, a visit to this magnificent Convent offers fascinating insight into the high degree of craftsmanship that prevailed in Santorini in the medieval times. There is a street that meanders through the Convent and if you are lucky, you can hear the nuns singing Vespers.