Regions of Central Spain
Around Madrid

The Regions of Castilla y Leon and of Aragon in Central Spain offer many historical treasures often overlooked by tourists. From masterpieces in Gothic architecture, to ancient universities & charming medieval quarters with typical plazas and narrow cobbled streets. A look into a more traditional Spain and a chance to sample some incredible regional delicacies which should not be missed!
Regions of Spain 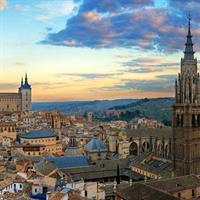 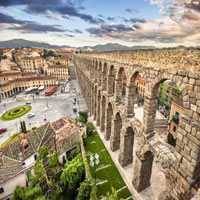 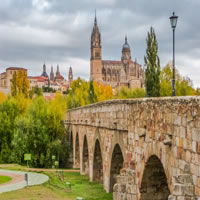 Central Spain contains some of the last great unexplored areas, as well as some of its most glorious architectural and historic treasures. It's a paradise for driving enthusiasts. Mile upon mile of empty road through spectacular scenery and forgotten villages, leads you from one to another of the great cities. This Spanish heartland is a mountainous and often wild region, where wild-life flourishes and the mid-summer sun bakes the land.

More details
Visit Madrid (museums and nightlife), Segovia (famous for its historic buildings including the three main landmarks: its midtown Roman aqueduct, its cathedral - one of the last Gothic to be built in Europe) , Toledo (" the Imperial City" and the "City of the Three Cultures" for the cultural influences of Christians, Muslims and Jews reflected in its history) , Cordoba (an important Roman city and a major Islamic center in the Middle Ages. It’s best known for La Mezquita, an immense mosque dating from 784 A.D., featuring a columned prayer hall and older Byzantine mosaics) and Seville (the birthplace of Flamenco and the city where the most amazing Easter processions take place) with a rent a car. This is a flexible package. Select your number of nights in each city, desired hotel and activities.
Included:

Close more details
A wonderful combination of stunning cities in Spain . Combine Barcelona (the genius of Gaudi runs throughout the city; the Gothic Quarter inspires, and the city is on the biting edge of fashion, architecture, food, style, and music), Girona (a gorgeous place to visit, with medieval walls, narrow winding city streets, and one of the best preserved Jewish Quarters in Europe), Cordoba ( important Roman city and a major Islamic center in the Middle Ages. It’s best known for La Mezquita, an immense mosque dating from 784 A.D., featuring a columned prayer hall and older Byzantine mosaics) , Toledo (" the Imperial City" and the "City of the Three Cultures" for the cultural influences of Christians, Muslims and Jews reflected in its history) and Madrid (renowned for its rich repositories of European art, including the Prado Museum’s works by Goya, Velázquez and other Spanish masters. Travel between these cities by train and rental car. This is a flexible package. Select your number of nights in each city, desired hotel and activities.
Included:
11 nights from $1,636*

Close more details
This self-drive, independent vacation package will introduce you to all the most breathtaking aspects of Spain. The atmosphere is dynamic, the cities are lively and the countryside is stunning. Start with a visit to exciting Madrid (an undeniable energy permeates the air, the food is heavenly and the museums are out of this world) then pick up your car for a short ride to historical Toledo (a UNESCO World Heritage site which has hosted various cultures and religions throughout its storied history). Continue to sophisticated Seville (rich in Moorish heritage, stunning monuments dominate the skyline, the passion of the Flamenco dance and the scent of orange blossoms in every quarter) and into Granada (the palace and gardens of the Alhambra, the city is littered with influence of Renaissance, Baroque and Neoclassical elements). From here you drive to Valencia (the gateway to the Mediterranean; where history meets modernism - theater and cinema, commerce and culture blend in the presence of stunning beaches) and finally end with a visit to cosmopolitan Barcelona (featuring the awe-inspiring architecture of artist Gaudi, a vibrant nightlife leading the world in areas of fashion, food and music while celebrating its own unique identity). This is a flexible vacation package. Select your number of nights in each city, desired hotel and activities.
Included:
11 nights from $1,118*

Feedback from our travelers
4.7 out of 5 stars

Oscar F ...
Read more - See this traveler's itinerary
Traveled on: July 15
Everything good. Thanks for your pleasant service.