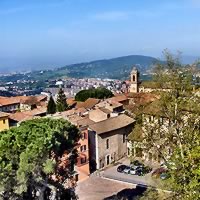 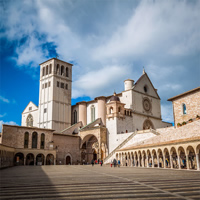 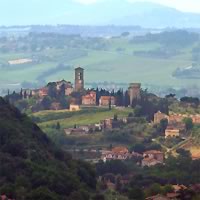 Northern Umbria is an exquisite landscape of unblemished nature where olive trees, fields of sunflowers and wild flowers glow under the warmth of the Umbrian sunshine. Perugia, the capital, offers silky chocolates, medieval alleys, and one of Italy's top painting galleries. Just east is one of Italy's spiritual centers, the hill town of Assisi, birthplace of St. Francis. Further north the rocky border city of Gubbio is home to one of Italy's wildest pagan festivals, and Città di Castello contains its own stash of art treasures. To the south, along the Tiber River valley, are the towns of Deruta and Torgiano, best known for their hand-painted ceramics and wine. This land is the home of so many high quality wines.

Spend a few days in artistic Florence, then pick up your car and drive to beautiful Northern Umbria for a visit to the area.This is a flexible vacation package. Select your number of nights in each city, desired hotel and activities.
Included:
7 nights from $1,057*

Close more details
Begin your vacation in Rome, the Eternal City, then enjoy the beautiful landscape of Italy en route to Northern Umbria, San Marino (a mountainous microstate located within Italy and one of the world's oldest republics) and finally Bologna, a thriving university town and architectural gem! This is a flexible vacation package. Select your number of nights in each city, desired hotel and activities.
Included:
10 nights from $1,222*