One of Europe's oldest cities, Belgrade's wider city area was the birthplace of the largest prehistoric culture of Europe, the Vinca culture. Nowadays, it is the central economic hub of Serbia, and the capital of Serbian culture, education and science. The city's main attractions are: Skadarlija, the National Museum and adjacent National Theatre, Zemun, Terazije, Students' Square, the Kalemegdan Fortress, Prince Michael Street, the Parliament, the Temple of Saint Sava, and the Old Palace. The hilltop Avala Monument offers views over the city. Josip Broz Tito's mausoleum, called The House of Flowers, and the nearby Topèider park are also popular among visitors. 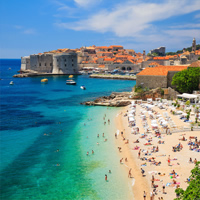 "The country of a thousand islands," Croatia is situated on the Adriatic coast. It has a rich cultural and historical heritage, with many different influences - Greek, Roman, Celtic, Illyrian, Austrian, Hungarian, Byzantine and Islamic. The Croatian coast is among the most beautiful in the world having unique cities like Dubrovnik which was the rival of Venice for centuries, Split with its Diocletian palace, great beaches and more than 1001 islands to choose from. Besides its natural beauty, Croatia also offers: a great history, many museums and a unique mixture of cuisines.
Croatia FAQ
When to Go
Tipping in Croatia
Driving in Croatia 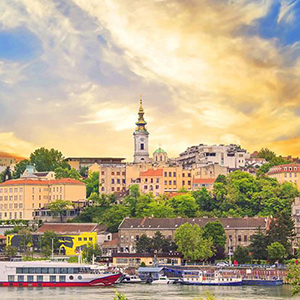 Serbia is a fascinating country with a turbulent history. Its visitors will be surprised by the wide variety of architectural styles ranging from Romanesque to Gothic, from Renaissance to baroque. There are many great monuments including fortresses, ancient churches, Byzantine-style basilicas, and Roman amphitheaters waiting to be discovered by visitors. Tourism in Serbia is mostly focused on the villages and mountains of the country. The most famous mountain resorts are Zlatibor, Kopaonik, and the Tara. There are also many spas in Serbia, one the biggest of which is Vrnjaeka Banja. The largest cities like Belgrade, Novi Sad and Nis, but also in the rural parts of Serbia like the volcanic wonder of Davolja varos, Christian pilgrimage across the country and the cruises along the Danube, Sava or Tisza attract many tourists.
Serbia FAQ
This package
3 Customer Feedbacks
Croatia
296 Customer Feedbacks
Serbia
19 Customer Feedbacks
Customer Reviews
Share your thoughts with other travelers
Write a Review
Share your thoughts with other travelersWrite a Review
Close [x]