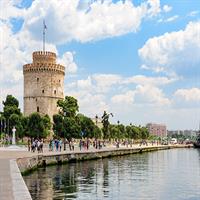 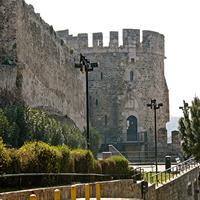 Thessaloniki is Greece's second-largest city and the capital of the Greek region of Macedonia. This is a city filled with Byzantine churches and chapels, as well as some Ottoman, and Jewish structures, a city with squares built around Roman palaces, whose markets pulse with life. The city is famous for its picturesque restaurants and tavernas as well as for its lively nightlife. Thessaloniki is known for its bougatsa delicacy that can be found in special stores in just about every corner of the city.

Make the most of your vacation package through Europe! Visit Athens, Mykonos, Santorini, Olympia, Delphi, Meteora and Thessanoliki with flights to the Islands and a rent a car in mainland Greece. There is no shortage of museums, churches, beaches, historic sights or activities to explore in these fascinating cities. This is a flexible vacation package. Select your number of nights in the city, desired hotel and activities.
Included:

Close more details
Combine Athens and Thessaloniki with a rent a car. Start with a visit to Athens, the cradle of Civilization, then drive to Thessanoliki . This is a flexible vacation package. Select your number of nights in the city, desired hotel and activities.
Included:
6 nights from $895*

Close more details
Combine three glorious cities in Greece and Bulgaria with this fun vacation, traveling between cities by train!. Begin your relaxing stay in Athens (the cradle of civilization and home of democracy. The heritage of the classical era is still evident in the city, represented by ancient monuments and works of art, the most famous of all being the Parthenon, considered a key landmark of early Western civilization), next, steel away in Thessaloniki (a Greek port city on the Thermaic Gulf of the Aegean Sea and the second-largest Greek city. Was the second-most well-fortified city in the Byzantine Empire, after Constantinople), and, end your stay in Sofia (Bulgaria’s capital and its largest city. Founded thousands of years ago, today the city continues to develop as the country’s cultural and economic center). This is a flexible package. Select your number of nights in each city, desired hotel and activities.
Included:
8 nights from $1,075*

Thessaloniki
Map of Point of Interest

See All More to Explore›

Browse all 154 customizable packages  or  Build Your Own Itinerary

4.7 out of 5 stars
►
2 Reviews
See all Reviews for Thessaloniki