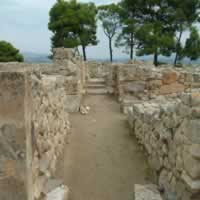 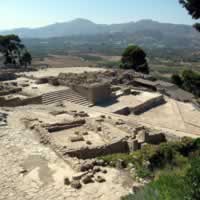 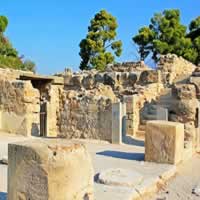 The Palace of Phaistos is located on the east end of Kastri Hill, the end of the Messara plain in South Central Crete, 39 miles southwest of Heraklion. It is considered to be one of the finest of all Minoan palaces. The preserves of the old and new palace can still be seen. Excavations in the area began in 1884. Other findings of the area include thousands of seal impressions and some tablets containing the Linear A script.

The Old Palace was built in the beginning of 2000 B.C, also known as the Protopalatial Period and remained in use for about three centuries. It was destroyed twice by earthquakes and was rebuilt. As a result, archaeologists can see three distinct phases. Levi believed that the first two phases constituted the oldest palatial buildings in Crete. A new palace was built at the same spot but was destroyed in the mid 15th Century B.C. After that only some parts of the palace remained occupied. When the Old Palace was destroyed, almost entirely by an earthquake, a new one was built at the same site. The New Palace covers a smaller area compared to the old thus allowing the visitor to still see remains of the Old Palace. Some of the ruins can be seen by visitors including the area where the Phaistos Disc was found, but most of it remains accessible only to the experts.

An individual who visits Crete should definitely go to Phaestos. The beautiful natural setting for one is something that should not be missed. Unlike Knossos, where walkways of scaffolding scarred the Palace and much has been roped off, to prevent access to visitors who must look at it from a distance, Phaestos is an up close and personal experience. The site is almost never crowded and you can idle around and discover the place at your own speed and time experiencing some of the most spectacular views that Crete has to offer.

The Palace
In the western wing a huge chamber is of interest. It concerns a room supported by pillars and a triple pylon towards the central yard for the possible use of worship. In the same wing there are other rooms which are associated with worship.

The central yard preserves its pavement which is dated to the Palaeoanactoric Period (1900-1700) B.C.
In the eastern wing only a small section is preserved which includes a room with skylights and purification tanks. In the northern wing lie the "royal suites”. The sacredness and formality of these suites are emphasized by the exterior wall of the central yard which has protrusions and recesses in a symmetrical layout, the nearby central entrance with half pillars, as well as the altar placed on a small flight of stairs which lies in the corner between the north and west wing. A long corridor and interior yards give access to a complex of rooms and to a larger yard with a ceramic furnace in the center.

A `banquet hall` supported by pillars may have existed on a level with a view of the central yard. The rest of the wing is occupied by official apartments. Two rooms with a luxurious construction are discerned (alabaster paving on the walls, floor tiles, decorative wall frescoes) which are surrounded by skylights, balconies and a large peristyle yard. Apart from the palace, housing complexes and a temple of the Archaic period, perhaps of Rhea, have been excavated towards the NE and SW of the area.

Archaeological finds from the palace are exhibited at the Museum of Heraklion, such as the famous disc of Phaistos, the large collection of vases with a variety of decorative colors and many more.