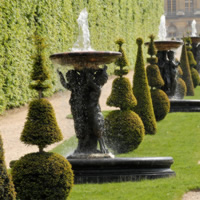 Bouc Bel Air is well positioned between the two large cities of Aix en Provence and Marseille. The village is built around a rock and an ancient 12th-century chateau that provides a magnificent panoramic view of the countryside. Make sure to spend time exploring the exceptional Albertas Gardens, true works of art, these gardens are beautifully laid-out and truly an enchanting place to visit. 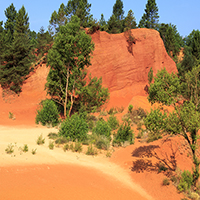 The lovely Provencal village of Châteauneuf-le-Rouge is situated between Aix en Provence and Saint Maximin. The village gets its name from both the red color of the soil (clay and ochre) as well as the chateau built inside it borders in the 16th-century. Here you will be charmed by the architectural heritage, the elegant gardens that encircle the chateau with ancient trees, and the murmuring fountains on its restored squares.

The area has recently undergone major economic and population expansion with many residence who prefer a relaxed lifestyle, moving here due to its location to Aix and Marseille. The village is famous for it`s award winning food festival which is held every year on the first Sunday in July where you can sample local delicacies made by the most prestigious restaurants in the regions. 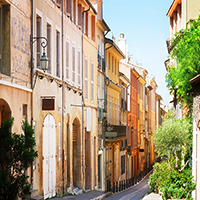 The village of Rognes is a historic village dating back to the stone-age. It was built on the slopes of the Foussa (the name of the hill) and has been rebuilt several times over the centuries, and also suffered a devastating earthquake in 1909 that almost totally destroyed the village altogether. Today the village is nestled at the foot of the Rognes hill and famous for its wine, truffles and stone. Make sure to see the Chapelle Hermitage Saint Marcellin, the Notre Dame of the Assumption Church, and the Chapel of Saint-Marcellin while visiting the village. The surrounding countryside is beautiful as well offering some great hiking and mountain biking. 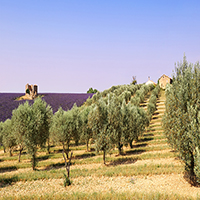 Rousset is a large area that lies at the foot of Sainte-Victoire, in the heart of the beautiful landscapes filled with vineyards and olive trees. The Rousset region is divided into two distinct parts: the village north of the A8, and the industrial zone on the other side of the highway which is home to numerous industries and the southern part of the village. Rousset has been preserved with a typical Provencal village feel, numerous paved streets, bordered by typical Provencal houses. It`s a great town to wander through its quiet streets lined with shops and craft workshops and soak up the atmosphere at one of the cafes. There are two treasures to be discovered in the village, the outstanding vineyards which produce a well-known wine and the wonderful quality olive oil. 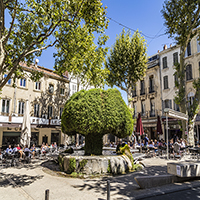 Saint-Cannat, near Aix-en-Provence, dates back to the 5th-century. The village is known for its fountains, doorways which are the remains of the medieval ramparts, old communal wash-houses, the church with its notable font, an ancient 5th-century sarcophagus, and the Automat Village which is very popular with children. Make sure to visit the village museum in Saint Cannat, it offers a rich history of the area with exhibits that are devoted to Provencal garments, agricultural tools, and the 1909 earthquake. 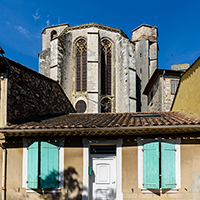 Saint-Maximin-la-Sainte-Baume is located west of the Var department of Provence, a bit remote from most of the popular tourist destinations in the region, but offers several notable sights to visit. The town is lively with two distinct areas, both interesting to explore. The old town is centered around the `Jewish quarter` with traditional medieval arcaded buildings, and the active shopping center based around Rue General de Gaulle.

The town is best known for the 13th-century Basilica of Saint-Marie-Madeliene, the largest gothic monument in Provence that dominates the town. The cathedral was built in order to contain the relics of Mary Magdalene, as well as other important historical objects. Another highlight in Saint Maximin is the Royal Convent of the Dominicans, built to house the monks who established a community here from the end of the 12th-century. The convent has a lovely gothic style cloisters and garden, and is surrounded by other monastic buildings. 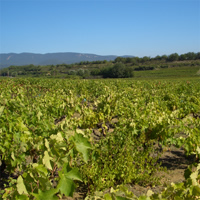 Situated between the Alpilles, the Camargue and the Aix-Marseille route, Salon de Provence is a beautiful historic village with many medieval buildings to admire. The village is one of the oldest in Provence offering an attractive center among charming open squares and several small fountains, as well as the clock tower gateway that was built in the 17th-century.

The town is surrounded by wonderful countryside where the olive trees cover the hills and have formed the basis of the towns renowned olive oil industry for over 600 years. The culture of the olive tree has always been a part of the village`s traditions. Visit the Museum of Salon and Crau to discover all the customs and traditions of the region, including its natural history of past and present. The main pedestrian street offers lots of cafes to enjoy the Provencal atmosphere the village has to offer. Make sure to visit the Chateau del`Emperi, a castle built in the 9th-century which was the residence of the archbishops of Arles, as well as the Holy Roman Emperors. Some other highlights in Salon de Provence are The Church of Saint-Michel and the Town Hall.