What is Luxembourg known for?

Luxembourg is one of the world`s smallest countries, landlocked by Belgium, France and Germany. It boasts award-winning wine and food, an ancient network of underground tunnels and is best known for its status as Europe`s most powerful investment management center. It is often compared to Switzerland. Both NATO and the EU have installations in Luxembourg as do other European organizations.

What are the best places to visit in Luxembourg?

Spend time in the lush, green region of Ardennes, which consists of mountains that extend from southeast Belgium. You`ll find some fascinating castles in this region, such as Vianden castle. The cosmopolitan Luxembourg City may be modest in size, but it is a prosperous and bustling metropolis steeped in history. Be sure to check out the bizarre rock formation, creeks and waterfalls at the Mullerthal, sometimes referred to as `Little Switzerland.` Explore the hiking trails and rich iron mining area of Red Rocks and discover the great white wines in the Moselle region.

When is the best time to visit Luxembourg?

Weather in Luxembourg is moderated somewhat by the sea some 200 miles to the north. Summers can be warm. There are about 10-13 rain days each month. It is wetter in the north. The best time to visit is the Springtime, when the wildflowers bloom in abundance. For more information, check out: Best Time to Visit Luxembourg

How many days should I spend in Luxembourg?

We recommend 2-3 days based on what you want to see and do.

What is the best way to get around Luxembourg?

Luxembourg is a compact country, making it easy to reach nearly any town in the country in an hour or less by public transport. The Mobilitéit agency coordinates the country`s trains and buses. Most public transportation in Luxembourg is Free! You only need a ticket for cross-border journeys, or if you wish to travel first class on the train.

By Train: The Chemins de Fer Luxembourgeois (CFL) train network is generally a good way to move across the country. Luxembourg city is the main railway hub, from where trains head in all directions. While the south is reasonably well covered, the north is limited to one main line. Trains in Luxembourg are comfortable and modern, and generally run perfectly on-time.

By Bus: The country is served by countless bus services, reaching every little village in the country. Most services run at least every hour throughout the week, with higher frequencies during weekdays and reduced operation on Saturdays and Sundays.

The bus service out of town is also extensive and reliable. Buses numbered 100 upwards will take you out of the city. For destinations in the north of the country, one usually first needs to take a train to Mersch, Ettelbruck, Wiltz, or Clervaux, and change there to a bus to the final destination. Other destinations usually have a direct bus from the capital.

Buses are modern and clean. Screens and announcements on-board advise of the next stop on most bus services. It is important to hail the bus you wish to catch by raising your hand towards the road as it arrives.

By Car: Luxembourg`s road infrastructure is well-developed. Anywhere that happens to lie along the major motorways is easily accessible (including Grevenmacher in the east, Mamer to the west, Bettembourg to the south and Mersch and Ettelbruck in the north). Esch-sur-Alzette, the country`s second city (more like a small town by international standards) also has its own motorway link.

Driving in Luxembourg is nowhere as challenging as in some other European countries. The locals are generally polite. When entering the highways from side roads into the slower traffic lane, the other drivers will allow you to join the traffic line, but traffic indicators are essential. As with other highways in Europe always keep in the slow traffic lane, keeping the fast lane for overtaking. Some drivers travel at high speeds and will flash their headlights to indicate that they are in a hurry, even if you are sitting on the speed limit. Normal day-to-day driving in Luxembourg is generally smooth but traffic does slow down in peak times.

Finding parking in Luxembourg city center on weekends can be difficult. Most spaces are quickly taken and some parking garages close early. The best option is to find somewhere near the station and then walk around the city center.

By Bike: The streets and landscape in Luxembourg make for good cycling territory.

What is the currency of Luxembourg?

Luxembourg uses the Euro. Also, a service charge of 15% is added to your food bill at a restaurant, so a tip isn`t mandatory, but many people add a Euro or two for good service. For more detailed information, consult our guide by clicking here Tipping in Luxembourg.

Do people speak English in Luxembourg?

`Lëtzebuergesch` or Luxembourgish is the national language. It is taught in schools, but French and German are also spoken widely and are considered the `official languages.` French is the administrative language. English is common, especially in larger villages and tourist destinations within Luxembourg. We suggest you get a good English-French guidebook and familiarize yourself with common phrases such as hello, goodbye, excuse me and numbers 1-10. 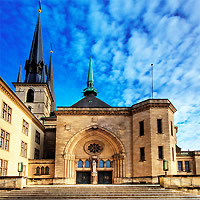 Browse all 22 customizable packages or Build Your Own Itinerary