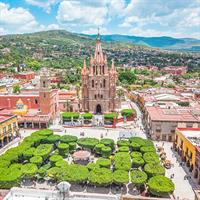 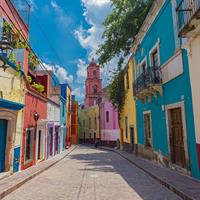 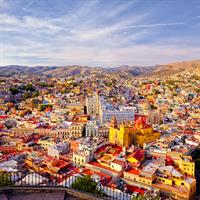 The charming colonial town of Guanajuato is a magical energetic city with a unique landscape. The city`s cobblestone streets and colorful houses tumble down the mountainside in the heart of Mexico. A UNESCO World Heritage Site where numerous historic sites stand, great dining venues and shopping in quaint boutiques.

Culinary journey through Mexico!. This package begins in Mexico City (one of the most important cultural and financial centres in the world. Its historic center, better known as Zocalo, is declared World Heritage by UNESCO and is the heart of a living culture that exudes everything accumulated since the founding of Tenochtitlan as well as its fantastic cuisine), continue in Puebla (is the birthplace of Mexican gastronomy, foodies attracted to Puebla can enjoy the delicious culinary options on a street food tour (take chance to try a special poblano sandwich called a cemita, sample deep-fried herbs called huauzontle in the market, and guzzle down chalupas -small corn tortillas, topped with salsa before being fried- in a tiny local eatery) and ends in Oaxaca (considered the gastronomic capital of Mexico, Oaxaca is best known for its seven classic varieties of mole, a thick, complex sauce served with meat and rice and its home of its most famous export - the Mezcal (the base of the worldwide tequila!). It is also the most ethnically and linguistically diverse state of Mexico and one of the most preserved and astonishing pre-hispanic cities). This is a flexible package. Select your number of nights in each city, desired hotel and activities.
Included:
7 nights from $1,049*

Puebla
Map of Point of Interest

Browse all 25 customizable packages  or  Build Your Own Itinerary