What is Puerto Rico known for?

What are the best places to visit Puerto Rico?

San Juan is Puerto Rico's capital and largest city, sits on the island's Atlantic coast. Its widest beach fronts the Isla Verde resort strip, known for its bars, nightclubs, and casinos. Cobblestoned Old San Juan features colorful Spanish colonial buildings and 16th-century landmarks including El Morro and La Fortaleza, massive fortresses with sweeping ocean views, as well as the Paseo de la Princesa bayside promenade Culebra Island is a small, sparsely populated island and a surrounding group of cays off the east coast of Puerto Rico. In the northwest, Flamenco Beach is a long crescent of white sand and turquoise water backed by tree-covered hills. Nearby Tamarindo Beach offers clear waters full of fish, sea turtles, and rays. In the southwest, Punta Melones beach is known as a viewpoint for dramatic sunsets. Vieques Islandis a Caribbean island off Puerto Rico's eastern coast. It's known for boat tours of Bioluminescent Bay (or Mosquito Bay), where microorganisms give the water a blue-green glow. It also offers secluded beaches and snorkeling. Wild horses roam the countryside, much of which is preserved as the Vieques National Wildlife Refuge. The Fuerte de Vieques is a mid-19th-century Spanish fort and museum.

When is the best time to visit Puerto Rico?

The weather in Puerto Rico is beautiful with average temperatures around 85 degrees making it a year-round destination. The best months to visit are around the middle of April through June when the island experiences pleasant weather, this is the high season also when it can be busy at hotels and attractions, but cheaper rates for travel are not hard to come by. June 1st brings Hurricane season to the tropics, which can be common in Puerto Rico throughout November. The beginning months of the year are the driest time on the island and chances of a hurricane are the highest from July to September.

How many days should I spend in Puerto Rico?

What is the best way to get around Puerto Rico?

Renting a car is the best way to travel around Puerto Rico. International named rental car companies can be found at the airport and in the major cities. There are plenty of options for public transportation in the bigger cities, especially San Juan with a great Metro and bus network. Having a car when you visit the country allows you to branch out and explore outside of the cities.

What is the currency of Puerto Rico?

The currency of Puerto Rico is the US dollar.

The official languages spoken in Puerto Rico are English and Spanish, many people speak English especially in the service industry at hotels and restaurants. Most of the island's inhabitants have a good comprehension of the English language. We recommend you get a good English-Spanish guidebook and learn common phrases such as hello, goodbye, please, thank you, and numbers 1-10.

4.7 out of 5 stars
► 6 Reviews
This was the second time we used Tripmasters. We hope to use them again. Everything worked out well. We had 3 flights and all were as scheduled. Our ...
Read more - See this traveler's itinerary
Traveled on: 11/5/2021
Everything was good! 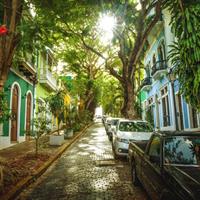