Welcome to Luxor! Upon arrival at the airport, you will go through customs and immigration. Should you opt to purchase a transfer to your hotel; a representative will be waiting for you as you exit immigration. Arrive at your hotel, check-in and do not give in to jet lag! There is so much for you to see and do!

We recommend you get acquainted with the city, stroll around the center of the city found on the East Banks of the Nile River. Here you will find plenty of dining options some located along the river serving up delicious authentic cuisine. After some lunch, wander around the city and check out some of the different market places, such as the one that takes up several streets near the Luxor Temple. This is one of the older markets and is mostly pedestrianized with shops offering souvenirs and other unique items such as alabaster bowls and vases (bargaining is a must!).

Next, check out the magnificent Temples of Karnak on the East Bank, take a stroll along the corniche where you will find the Luxor Temple and the intriguing Luxor Museum. The large Ancient Egyptian Luxor Temple was constructed in 1400 BC, built by the New Kingdom Pharaohs Amenhotep III and Ramesses II the Great. The temple was a major place of worship and the host of many Egyptian ceremonies, the temples here feature chapels and the Luxor Temple is one of the best-preserved in the city. The site includes relief carvings, an obelisk, hieroglyphs and an avenue lined by sphinxes.

Check out the Luxor Museum, which sits on the corniche overlooking the river in a modern 2 story building. The museum opened in 1975 and displays a wide range of ancient artifacts including grave goods from the tomb of Tutankhamun, a collection of 26 New Kingdom statues found buried in the Luxor Temple, and royal mummies of two pharaohs. Be sure to visit the gift shop on-site and pick up some souvenirs.

Take a relaxing cruise on the River Nile on board a traditional Felucca, the river is a serene location in the late afternoon with soft lighting and a cool breeze before sunset. Sit back and take in the rhythm of the river and visit popular stopping places such as Banana Island, a tiny palm-covered island just a few miles upriver from Luxor. Sail back just before sunset and capture the breathtaking views of a Nile sunset from your boat, this is when the river is the most majestic.

Wader along the beautiful riverside Corniche and find a restaurant offering outside seating or one with a rooftop terrace to take in the magnificent riverside views at dusk. Many meals in Luxor start with pita bread and mezze such as baba ganoush or taboule, the main courses at traditional restaurants include meat or chicken, salad, vegetables, rice, and cheese.

After dinner, stroll along the streets of Luxor and see the city, the river and the ancient temples lit up at night. Enjoy the magical setting of the city at night before retiring for a good night`s sleep. 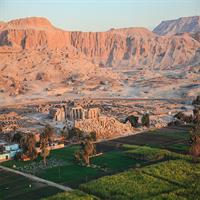 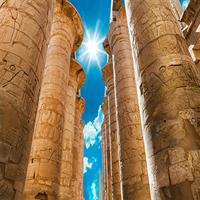 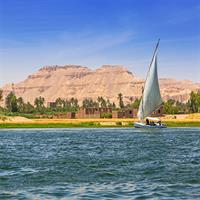 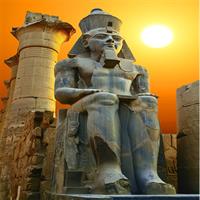 Start your day of super early with an exhilarating Hot air balloon ride to see the sunrise over the majestic mountains and ancient monuments on the West Bank of Luxor. Glide over the Valley of Kings, the Temple of Hatshepsut and Colossi of Memnon taking in the amazing views over these important landmarks.

After an exciting journey soaring over the city enjoy a delicious breakfast at one of the local cafes or restaurants serving up delicious, traditional falafels and fuul.

The city of Luxor is the world`s largest open-air museum filled with historical sites, ancient temples, and museums. Many of the city`s attractions open as early as 6 am, it gets extremely hot during the day so it`s a good idea to get out early to explore the sights. Do some temple hopping on the West Bank filled with magnificent monuments, you can explore on your own or hire a private guide.

See the massive monumental Colossi of Memnon featuring two stone statues that represent the Pharaoh Amenhotep II who reigned during the 18th-century Dynasty of Egypt. These massive statues stand in the Theban Necropolis, two faceless Colossi depict the seated king on a throne which rises to 60 feet high, weighing in at over 700 tons, both carved from a single block of sandstone. This location is a great place to visit and a photo op on the way to the other well known archeological sites.

Check out The Valley of the Kings set in the heart of the Theban Necropolis, the site where tombs were built for the powerful nobles of the New Kingdom. There are 63 known tombs and chambers here with royal tombs decorated by Egyptian mythology scenes. The famous tomb of Tutankhamun was discovered here in 1922 by Howard Carter it is one of the most famous archeological sites in the world and became a World Heritage Site in 1979.

See the Valley of the Queens where the wives of Pharaohs were buried during ancient times, it was known as Ta-Set-Neferu which translates to `the place of beauty`. The valley consists of the main wadi, which contains 91 tombs.

Visit the ancient Egyptian village of Deir el-Medina where many of the artisans and craftsmen who worked on the royal tombs lived with their families. The village was called Set Maat by the Egyptians and translated to `the place of truth`, the servants who lived here were known as `Servants in the Place of Truth`. The small village was once filled with 68 households and the Temple of Hathor (Goddess of love and truth) or Deir el-Medina can be found here.

Finally make a brief visit to Medinet Habu, the location of the Mortuary Temple of Ramesses III. This is an important temple and the best-known source of inscribed reliefs, depicting the advent and defeat of the Sea Peoples during his reign. The giant temple is beautifully decorated with exquisite paintings and colorful murals and holds architectural and artistic importance, it once contained temples, storage rooms, workshops, and administrative buildings along with a royal palace.

There are a few places around the tombs to find some shade and refreshment including the shaded courtyard of the Marsam Hotel (Sheikh Ali`s). They offer a full menu, drinks and cold beers with excellent views. The Ramesseum Rest House is another great spot with a terrace that overlooks the Ramesseum offering cold drinks and beer.

Back in town seek out a swimming pool to cool off from a hot day in the desert, many large hotels offer pools. Relax poolside with a book and a beer then take a much-needed siesta until sunset.

Take a traditional Caleches ride (horse-drawn carriage) along the Corniche. These are very common in the city of Luxor providing visitors with a unique way to see the city and watch the sunset.

For dinner visit the popular Sofra (meaning `dining table`) Restaurant serving authentic Egyptian food with Arab inspiration. This unique restaurant takes diners on a journey through Egypt with a traditional menu featuring dishes from neighboring countries. Try Fatta Bil Moza, a lamb shank casserole dished up on a bed of rice with breadcrumbs and a yogurt sauce, they offer hot and cold mezze with everything on the menu cooked the old fashioned way. Enjoy your meal from their rooftop terrace with simply spectacular views over the city. 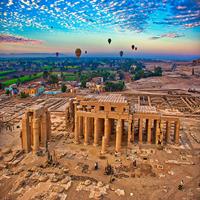 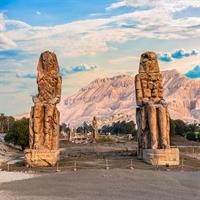 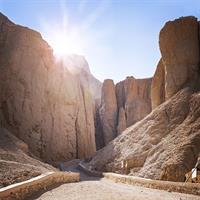 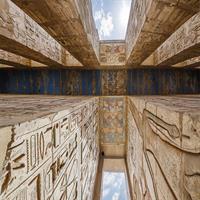 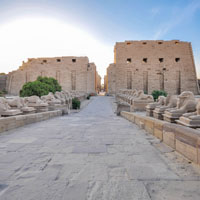 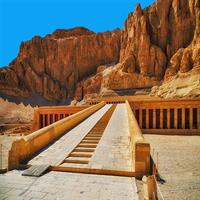 Begin your day with a morning walk along the Corniche where you will find an abundance of cafes and restaurants to sit and enjoy some breakfast. Then explore the Mummification Museum, a small archeological museum located on the Corniche featuring everything about mummification. The museum is dedicated to the Ancient Egyptian mummification process and features a library, bookstore, lecture hall and cafe on site. Visitors can get an understanding of the ancient practices and see exhibits displaying mummified cats, fish, and crocodiles along with a well-preserved mummy of the high priest Maserharti of Amun from the 21st-century Dynasty.

Rent a bicycle to explore some of the other sites found along the East Bank of the city. Bike rentals are in abundance and its a nice ride along the Corniche. Take a trip to the huge complex of the Luxor Temple, constructed to worship Amun Ra who was the greatest of the Gods. Ride along the Avenue of the Sphinxes, which once connected to Karnak. The Luxor Temple is a great sight in the early morning and at night when illuminated by the vibrant light of the sun, there is even a light and sound show held here each night.

Next head over to Karnak Temple, the second largest ancient religious site in the world (after Angkor Wat in Cambodia). The massive complex features several temples, massive decorated pillars, a great hypostyle hall, statues, and obelisks. There were around 30 Pharaohs who contributed to building this magnificent site which took over 2,000 years to complete. The Great Temple of Amun is the main building here and should be the first place you explore. Amun-Re was the local god of Karnak the temple stretches over 61 acres of land, it is an awe-inspiring building to wander around.

Visit Hatshepsut, the to longest-reigning female Pharaoh in Egypt, her mortuary temple was constructed in 1479 BC and was excavated in 1891 and scholars identified her remains in 1922. Hatshepsut is known as `the woman who was king` was the oldest of two daughters born to Thutmose I and his queen Ahmes, she became the queen of Egypt at age 12 and undertook Egyptian trade and would oversee building projects in the area around Thebes. She was in power for over 20 years and built obelisks to proclaim her glory. Her temple is one of the greatest architectural achievements due to its symmetry and astronomical alignment, the axis of the temple aligns directly with the Winter Solstice sunrise!!

The city is a fascinating site when the sun goes down, horse-drawn carriages line up along the bustling Corniche, traditional felucca`s float along the River Nile and the majestic temples are illuminated by vibrant lights. If you have a chance to see the Karnak Temple at night and witness the light and sound show you should take full advantage of this stunning sight. We suggest you take a horse, donkey or camel sunset ride out through the fields to witness the sun setting behind the Theban hills.

On your last evening in Luxor, choose from a wide range of restaurants in the city, such as European inspired, Westernized dining and Egyptian and Middle Eastern cuisine. Many of the restaurants can be found along the East Bank`s on the River Nile and due to the proximity to the river fish is offered on many of the menus. There is also a great variety of Indian dishes such as butter chicken and Thai curry, British fare and Italian favorites such as pizza. The Sofitel Winter Palace features a French-inspired menu in an upscale environment at Luxor`s 1886 Restaurant. 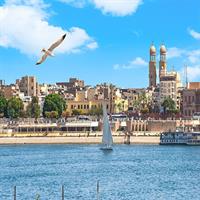 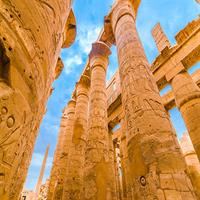 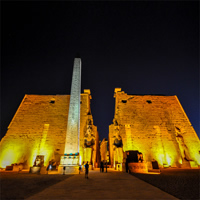 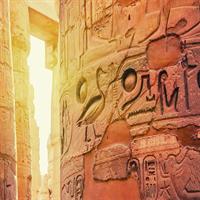 If you are able to spend additional days in Luxor, take a Nile River Cruise from Luxor to Aswan, spending 5 days cruising along the majestic river and a few nights in each city. Cruises include guided tours of archaeological sites located in each city.

Take a day trip to Dendera, the site of a well preserved Ptolemaic temple of Hathor which can also be combined with a trip to the Temple of Seti I at Abydos.

Visit the UNESCO World Heritage Site of Abu Simbel with a 2 day tour to Aswan and Abu Simbel and visits to Edfu and Kom Ombo along the way. See the Unfinished Obelisk, Philae Temple and the High Dam in Aswan.

Another alternative day out is to visit Hurghada and take a snorkeling cruise out to Utopia Island situated on the Red Sea. 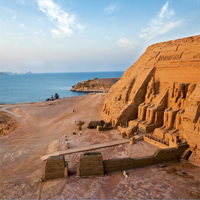 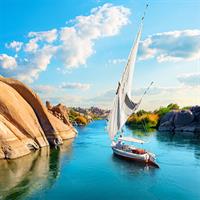 Your Last Day in Luxor 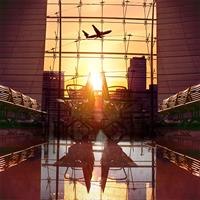