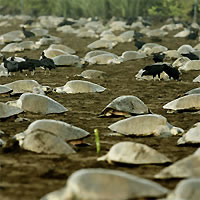 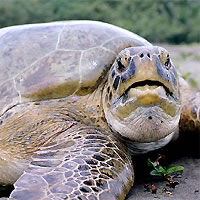 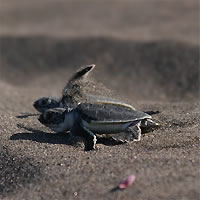 Weighing up to 700 pounds green turtles are among the largest sea turtles in the world, and the mystery of witnessing their nesting and hatching is an amazing experience that some visitors at Tortuguero National Park have had the privilege to enjoy!

Green sea turtles nest in large numbers from mid-June to early November. Turtles don’t arrive en masse but there is consistently a few dozens or more every night, meaning that in season Tortuguero is almost guaranteed.

Visitors can join tours to try and catch a once in a lifetime glimpse at the green turtles laying their eggs on the beach or capture hundreds of tiny hatchlings emerging from the nest and making their way to the water.

Three more species nest in Tortuguero, laying their eggs from about March through October.

If visiting during the nesting season, go with a trained, professional guide who can ensure your safety and the turtles.