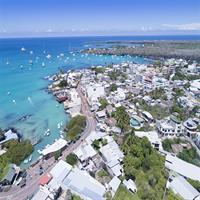 Santa Cruz Island is the main island for tourism in the Galapagos, it sits in the middle of the archipelago and is the second largest island after Isabela. The capital is Puerto Ayora, a small port town situated on Academy Bay on the southern coast. This charming bustling port town serves as a central base for exploring Santa Cruz and surrounding islands. There are water taxis and a cruise port located by the main docks, which is also where many of the resident sea lions and pelicans hang out. The main street in town is Avenida Charles Darwin which runs east to west along the bay where most of the accommodations, restaurants, shops, and bars can be found. There are more hotels and entertainment options found around the bay along with several tour operators offering a variety of day tours.

The small town can be explored on foot, a bicycle is also a great way to get around the main roads as well. There are quaint hotels, beautiful architecture, shops, galleries and seafood restaurants that fill the streets in the main part of town. Santa Cruz is filled with a variety of vegetation including Scalesia Forests, cacti, and areas created by lava flow thousands of years ago. The abundance of wildlife to be seen in the Galapagos is amazing, sea lions, marine iguanas, Galapagos tortoise, sea turtles, blue-footed boobies, Frigatebirds, Finch`s and even flamingos live on the islands.