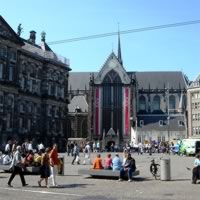 Dam Square with its beautiful Royal Palace is the core of Amsterdam. It was created in the 13th century when a dam was built around the river Amstel to prevent the Zuiderzee Sea from swallowing the city. Now it is the central square between Rokin and Damrak. The grand 17th century Royal Palace (Koninklijk Palace), Nieuwe Kerk, National Monument, and Madam Tussaud's are its main attractions. There are food stalls, restaurants and shops, including the trendy Bijenkorf, Magna Plaza, Bonneterie and the Amsterdam Diamond center. The two main shopping streets in Amsterdam, Kalverstraat and Nieuwendijk, both come out on Dam Square. Whatever the weather, there is always something going on here so expect lots of entertainment. In spring, there may be a carnival on or you can have a go on the colorful Ferris wheel. In the summer months, mimes and other street performers come out to surprise unexpected onlookers. 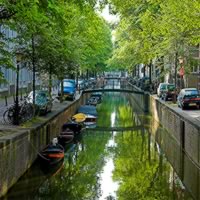 A series of concentric, semi-circular canals called the Grachtengordel, were built around the old heart of town during the 17th century Golden Age. Alongside these beautiful canals you can see the typical architecture of the 17th Century canal houses with their typical gables. The three main canals (Herengracht, Keizersgracht and Prinsengracht) line the Old Center on the west and south side. The canals are one of the most typical Amsterdam neighborhoods with lots of different interesting features. On the west side you will find the Anne Frank House and the Westerkerk. In the middle part you will find a section called 'the nine streets', between Leidsestraat and Raadhuisstraat, which are a haven for Dutch designs and vintage fashions, while southwards is the Singel canal's colorful Bloemenmarkt flower market and the café lined squares of Rembrandtplein and Muntplein. And on the far south end you will find the best nightlife, restaurants and places to sit, drink something and watch the street performers and people. Amsterdam is called 'the Venice of the North' because of its 165 canals with a length of 47 miles and more than 1400 bridges crossing over. 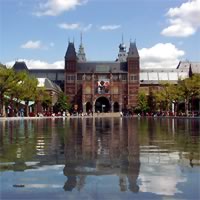 Southwest of the city center and beyond the canal loop is Amsterdam's Museum Quarter. Largely a marshy meadow until the 1800's, the Museum Quarter today is one of the city's most prestigious (and safest) central neighborhoods, home to high end shopping, the city's biggest park and some of its best restaurants. This area is gracious and residential, surrounded by the Concertgebouw (concert hall) and the three major and most important museums in Amsterdam, the Rijksmuseum, the Stedelijk Museum of Modern Art and the Van Gogh Museum. Many international clothing brands have their shops in P.C. Hooftstraat and Van Baerlestraat. The U.S. and U.K. consulates are here, too. And, of course, Museumplein is a great place to sit in the sun, enjoy your lunch or just relax. This cultural area is very crowded during the day, but deserted at night. West of the Museum Quarter lies the greenery of Vondelpark and eastwards is the eclectic De Pijp neighborhood, crammed with eateries and bars and populated by everyone from students to artists. 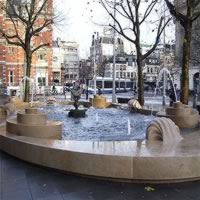 Amsterdam's most popular nightlife center, the Leidseplein is very crowded both by day and by night. When the sun is shining the terraces are quickly filled. Street performers entertain the public, mainly consisting of tourists, with acrobatic acts and music. At night the public changes: Amsterdammers come out here to celebrate their weekend, to visit the theatres, cinemas and clubs. The bars and clubs, such as Escape, close after 5am. And next morning, only a few hours later, it starts all over again with the first tourists settling down on the terraces. In addition to performance venues, movie theaters, bars, and cafes, there are plenty of good hotels and restaurants at this frenetically busy square and its immediate surroundings. 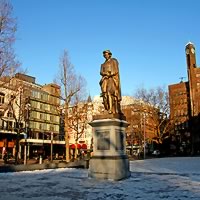 Until Rembrandt's statue was unveiled in 1876 this square was called Botermarkt (Butter market). For over a century it has been the center of Amsterdam's nightlife. A pleasant city square bordered by some of the most popular clubs and cafés in Amsterdam, and the renowned Tuschinski theatre. Rembrandtplein is a favorite of travelers itching to experience a taste of the city's nightlife. When the sun is shining, rows upon rows of outdoor summer terraces seat customers looking for a quick bite to eat or a place to begin their night out. Street performers entertain the public, mainly consisting of tourists, with acrobatic acts and music. Café Schiller Bar at Rembrandtplein 26 is one of the area's oldest and most popular spots for summer dining and drinking. 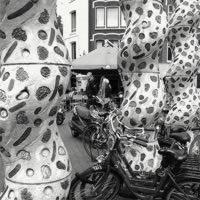 De Pijp (the pipe) was originally built to accommodate the working class population overflowing from the Jordaan neighborhood in 19th century Amsterdam. De Pijp is now a colorful mix of multiculturalism, countless cafés and bars, dining options from around the world and hip young professionals living in renovated buildings alongside dilapidated ones. The area still retains a certain grit that comes with working class roots and visitors may be surprised by the amount of litter left behind after Amsterdam's biggest outdoor market shuts down. But De Pijp is also littered with locals, so you'll be rewarded with a unique experience if you visit. Albert Cuypmarkt, the city's biggest open-air market sees some 20,000 visitors a day, most of whom are locals. You'll also find the Heineken Experience - the former Heineken brewery (in use until 1988) and Sarphatipark, a green respite from the bustling streets. 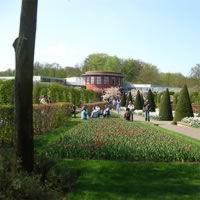 In the 17th century 'The Plantage' (plantation) was a green area outside the city walls where Amsterdammers spent their free time. From 1848 onwards it became one of the most prominent areas of Amsterdam. The Jewish Historical Museum and the Portuguese Synagogue tell about the rich and sad history of this area. Exotic plants can be seen in the Hortis Botanicus (botanical garden) and you can visit wildlife in Artis Zoo. The Waterlooplein's flea market is here as well. 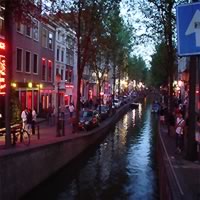 De Wallen, or as it is known locally, Rossebuurt, is one of the main tourist attractions of Amsterdam. You'll find the Nieuwmarkt with the former city gate De Waag, Old Town Hall (nowadays Hotel The Grand), De Oude Kerk, Museum Our Lord in the Attic, Chinatown with the Fo Kuang Shan temple, and many one-room apartments rented by prostitutes, sex shops, sex theatres, peep shows, and coffeeshops. The red-light district is the area left of the Damrak, the streets and canals in between Warmoesstraat and a square called Nieuwmarkt. The end of the two canals, Oudezijds Voorburgwal and Oudezijds Achterburgwal, marks the area's borders. Medieval Amsterdam was built here. De Wallen is best known for its window prostitution, sex shops and live shows, concentrated around the Oude Kerk, in alleys and around the canals. 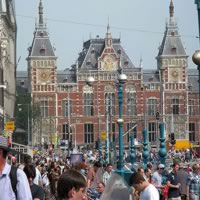 Amsterdam's main train station is the real heart of the city - central not only by the name, but also as the biggest public transport transfer spot, serving not only visitors to Amsterdam, but also city inhabitants. The station itself is one of Amsterdam's most impressive buildings and is used by more than 250,000 passengers each day. The station building was designed by Pierre Cuypers and A. L. van Gendt, and was first opened to the public in 1889. The building is situated on three man-made islands, which are supported by 8,687 wooden piles pounded deep into the sandy soil. Final stops of several lines of city trams and buses are located here, as well as waterfront stations of city ferry lines taking cars and passengers to Amsterdam North (Amsterdam Noord). It is also here that the main Amsterdam Tourist Office is located, as well as departure quays for the tourist boats cruising around the city canals. 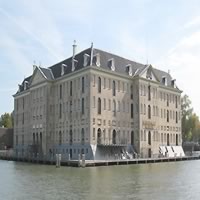 Centered on Centraal Station and stretching east and west along both banks of the IJ, this quickly redeveloping area includes the artificial islands, warehouses, and other installations of Amsterdam's old harbor (the new harbor lies west of the city). A shiny new kind of Amsterdam is taking shape on parts of this waterfront where old facilities have been demolished and are being replaced by new apartments and modern offices. Main attractions in this area are the Maritime Museum, The Amsterdam, NEMO, Muziekgebouw and IJ. Cruise ships dock at the Passenger Terminal Amsterdam. There are many mooring facilities for touring boats and inland cruise operations. Every year over 100 sea cruise ships and more than 700 river cruise ships are arriving in this part of the city and their number is growing. 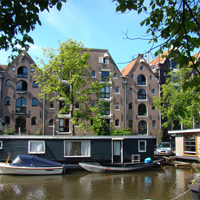 The Jordaan neighborhood is tucked inside of city center of Amsterdam and quite conveniently located. It is known for its beautiful houses, nice restaurants, upscale assortment of art galleries, street musicians and original shops. One of the most intriguing options for activity in Jordaan is to visit the Woonbootmuseum, a unique museum located in a converted houseboat, the only one of its kind in the world. The Lindengracht Market is located here as well. A lively market that takes place every Saturday offering numerous stalls of cheeses, fresh fish and beautiful bouquets. Wander round Lindengracht Market. Popular streets in the Jordaan are the Prinsengracht, the Westerstraat, Haarlemmerstraat and the `9 straatjes` (nine little streets).