What is Malaysia known for?

Malaysia features idyllic tropical beaches, scenic countryside landscapes, soaring skyscrapers, island escapes, sprawling gardens and parks, and home to Formula One. The country fuses multiculturalism, colonial history, and an indigenous lifestyle. The Petronas Towers are on display in Kuala Lumpur, steel covered twin towers that soar on the skyline. Exploring hidden caves such as Ramayana Cave at the Batu Caves, and Stepping Stone Cave a limestone cave leading to a hidden grotto. Sprawling gardens and parks such as Taman Tugu set amidst the lush verdant forest in Kuala Lumpur and a canopy walk through the treetops in the rainforest at Kuala Lumpur`s Forest Eco Park. Shopping throughout the country can be enjoyed at major shopping malls and markets such as Central Market which dates back to the ’30s a top location for shopping in Kuala Lumpur. Relaxing and soaking up the sun, sea, and sand in Malaysia is a favorite pastime with thousands of miles of pristine beaches along with tiny offshore islands like the Langkawi archipelago boasting one of the most stunning beaches in the country. The lush dense rainforests cover a majority of Malaysia along with mangrove forests and offshore coral reefs it is one of the most biodiverse countries in the world. Rare and endangered species can be seen including elephants, rhinoceroses, tigers, turtles, and orangutans. The Taman Negara National Park is a large preserve in the heart of Malaysia where an abundance of flora, fauna, and birdlife can be spotted. Formula One fans will flock to Malaysia`s Grand Prix in Sepang, opened in 1999 a major draw for international sports fans allowing for speeds up to 200 mph.

What are the best places to visit in Malaysia?

Kuala Lumpur is Malaysia`s largest city and its vibrant capital filled with high class shopping, historic temples, awe-inspiring towers, and fascinating museums. The streets here are filled with some of the most delicious food in the world and iconic landmarks such as the Petronas Twin Towers and the KL Tower. Exciting activities and adventures await at the ancient Batu Caves and the historic Jamek Mosque. Langkawi is officially known as `The Jewel of Kedah` a stunning archipelago of over 100 idyllic islands set in the breathtaking Andaman Sea. The beautiful island is filled with luxurious accommodations, the waters offer excellent diving opportunities and the beaches are the ultimate for relaxing and rejuvenation.Kota Kinabalu is a tropical jewel on Borneo Ilsnad surrounded by scenic countryside leading to hot springs, charming river cruises, scenic train rides and the main jewel of Mount Kinabalu. There area vast amounts of things to see and do, including interesting museums, bustling vibrant markets, delicious fresh seafood, breathtaking lookouts, and vibrant architecture.

When is the best time to visit Malaysia?

Malaysia offers a warm climate year-round due to its location just north of the Equator, making it a great destination for sunny vacations. The average daily temperatures year-round are warm 86F degrees or higher with high humidity. Due to its tropical climate, the country also experiences afternoon showers on most days which are normally short downpours. The monsoon season runs from late November to the middle of February and mostly affects the east coast. Due to the country`s shape and location, the seasons on each coast can be quite different. The west coast (Penang and Langkawi) experiences warm tropical weather throughout the year with the wet season taking place in September through October. The East Coast (Perhentians and Tioman Island) offer the best weather from June through August. The Highland areas (Cameron and Kelabit) tend to experience more frequent wet and cooler weather due to their elevated locations. For more information, check out: Best Time to Visit Malaysia

How many days should I spend in Malaysia?

What is the best way to get around Malaysia?

By Car: Driving around the countryside of Malaysia can be an enjoyable experience, driving in the bigger cities like Kuala Lumpur can be much more stressful. The Lebuhraya Highways runs north to south, a six-lane expressway that stretches for 619 miles from the Thai border in the north to Johor Bahru in the south. The airports and major cities offer the major rental car company names such as Hertz and Avis.

By Train: Keretapi Tanah Melayu Berhad (KTM) is the national railway company offered throughout peninsular Malaysia, the trains travel from north to south between the Thai border and Singapore stopping in major destinations such as Penang, Kuala Lumpur, and Johor Bahru. Trains are comfortable, economical, and modern with two lines; line one runs up the west coast from Johor Bahru through Kuala Lumpur and lines two branches off at Gemas and through Kuala Lipis up to the northeastern corner of the country near Kota Bharu in Kelantan.

By Bus:Bus travel in Malaysia is relatively easy, cheap, and comfortable with several long-distance services offered throughout the country. Most of the largest cities and towns had the main bus station, one for the local and regional buses, and then long-distance buses operated from another. Public buses serve small towns and villages across the country and long-distance services often operate on Konsortium Transnasional Berhad with brands including Transnasional, Cityliner, and Plusliner, some might not offer air conditioning and travel slowly.

What is the currency of Malaysia?

The currency is Malaysia is the Ringgit (RM). US dollars are not accepted. You will need to exchange your dollars for Ringgit. Currency Exchange desks can be found at the airport and major banks, it is advised to exchange some dollars for Ringgit before arriving in the country. ATMs are also located throughout the airport and at most major banks in the city. Normal banking hours are weekdays from 9:30 am until 4:00 pm and from 9:30 am until 11:30 am on Saturdays. Tipping is not a common practice, but you may find that most hotels, restaurants, and entertainment outlets do charge a 10% service charge and a 5% government tax on your bill which often deems tipping unnecessary. For more detailed information, consult our guide by clicking here Tipping in Malaysia.

Do people speak English in Malaysia?

The spoken language in Malaysia is Bahasa Malaysia and English. Most people in Malaysia can speak and understand English especially those working in the service industry. We suggest you get a good English-Malaysian guidebook and familiarize yourself with common phrases such as hello, goodbye, excuse me and numbers 1 -10. 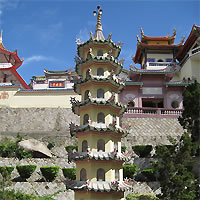 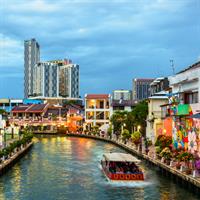 Highlights of Malaysia by Air
8 nights from 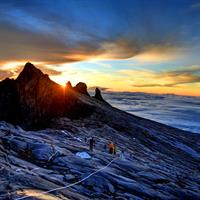 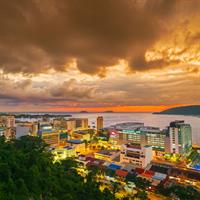