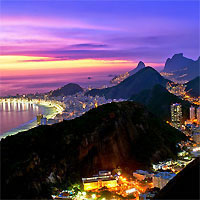 The Central Zone of Rio de Janeiro (Centro) is the historic part of the city, as well as its financial center. Major streets include Avenida Rio Branco and Avenida Vargas, both built from large strips of the colonial city. A number of colonial streets, such as Rua do Ouvidor and Uruguaiana have long been pedestrian spaces and the popular Saara shopping district has been recently pedestrianized. It i is also located in the center of the traditional neighborhood called Lapa, an important bohemian area frequented by locals and tourists.

Sites of interest include the Paco Imperial, constructed during colonial times to serve as a residence for the Portuguese governors of Brazil; many historic churches, such as the Candelaria Church, Sao Jose, Nossa Senhora do Carmo, Santa Lucia, Sao Francisco de Paula, Santa Rita, and the monasteries of Santo Antonio and Sao Bento. The Centro also houses modern concrete Rio de Janeiro Cathedral. Around the Cinelandia Square, there are several landmarks from the `Belle Epoque` of Rio (the golden age period of Rio from 1889-1931), such as the National Library building and the Municipal Theatre. Among its several museums, the Museu Historico Nacional (National Historical Museum)and the Museu Nacional de Belas Artes (National Museum of Fine Arts) are the most important. Other important historical attractions in Central Rio include Passeio Publico, an 18th-century public garden.

Santa Rita, and the monasteries of Santo Antonio and Sao Bento. The Centro also houses modern concrete Rio de Janeiro Cathedral. Around the Cinelandia Square, there are several landmarks of the Belle Epoque of Rio, such as the National Library building and the Municipal Theatre. Among its several museums, the Museu Historico Nacional (National Historical Museum)and the Museu Nacional de Belas Artes (National Museum of Fine Arts) are the most important. Other important historical attractions in Central Rio include Passeio Publico, an 18th-century public garden. 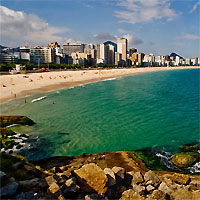 The South Zone of Rio de Janeiro (Zona Sul) is composed of several districts, among which are Leblon, Sao Conrado, Arpoador, Ipanema (the best city beach in the world), Leme, and Copacabana, which make up Rio`s famous Atlantic beach coast. Other districts in the South Zone are Catete, Gloria, Botafogo, Flamengo, and Urca which border Guanabara Bay and Santa Teresa, Laranjeiras, Cosme Velho, Lagoa, Humaita, Gavea and Jardim Botanico.

The South Zone is the wealthiest part of the city and the most popular overseas; the neighborhoods of Sao Conrado and Leblon, in particular, have the most expensive real estate in all of South America.

Copacabana beach hosts one of the world`s most spectacular New Year`s Eve parties, `Reveillon`, as more than 2 million revelers gather onto the sands to watch the fireworks display. As of 2001, the fireworks have been launched from boats, to improve the safety of the event. To the north of Leme, and at the entrance to Guanabara Bay, is the district of Urca and the Sugarloaf Mountain (`Pao de Acucar`), whose name describes the famous mountain rising out of the sea. You can reach the summit can be reached via a two-stage cable car trip from Praia Vermelha, with the intermediate stop on Morro da Urca. It offers views second only to Corcovado mountain.

Hang gliding is a favorite activity on the Pedra Bonita (literally, `Beautiful Rock`). After a short flight, gliders land on the Praia do Pepino (Pepino Beach) in Sao Conrado.

Since 1961, the Tijuca National Park (Parque Nacional da Tijuca) has been a National Park and is the second largest urban forest in the world. The Pontifical Catholic University of Rio (Pontifícia Universidade Catolica do Rio de Janeiro or PUC-Rio), Brazil`s top private university, is located at the edge of the forest, in the Gavea district. The 1984 film Blame It on Rio was filmed nearby, with the rental house used by the story`s characters sitting at the edge of the forest on a mountain overlooking the famous beaches. 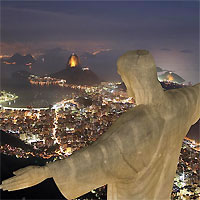 The North Zone (Zona Norte) starts at Grande Tijuca, a middle-class residential area just west of the city center, and continues for miles inland until Baixada Fluminense and the city`s Northwest.

This zone is home to the Maracana stadium located in Grande Tijuca, which was once the world`s highest capacity football venue able to hold nearly 199,000 people, as it did the World Cup final of 1950. Today its capacity has been reduced to conform with modern safety regulations and the stadium has introduced seating for all fans. Currently undergoing reconstruction, it now has a capacity for 90,000 fans. Maracana was the site for the Opening and Closing Ceremonies and football competition of the 2007 Pan American Games, and hosted the final match of 2014 FIFA World Cup and hosted the Opening and Closing Ceremonies and football matches of the 2016 Summer Olympics.

The North Zone of Rio also holds other tourist and historical sites such as `Nossa Senhora da Penha de Franca Church`, the Christ the Redeemer with its stairway built into the rock bed, `Manguinhos`, the home of Instituto Oswaldo Cruz, a centenarian biomedical research institution with a main building fashioned like a Moorish palace, and the beautiful Quinta da Boa Vista, the park where the historic Imperial Palace is located. Nowadays, the palace hosts the National Museum, specializing in Natural History, Archaeology, and Ethnology.

This section also home to most of the samba schools of Rio de Janeiro such as Salgueiro, Mangueira, Serrano, Imperio Serrano, Unidos da Tijuca, amongst others. Some of the major neighborhoods of Rio`s North Zone are Alto da Boa Vista, which shares the Tijuca Rainforest with the South and Southwest Zones; Vila Isabel, Tijuca, Sao Cristovao, Meier, Penha, Madureira, Fundao, Manguinhos, Olaria amongst others. 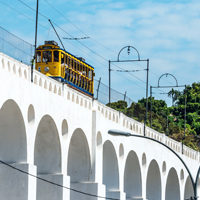 The West Zone of Rio de Janeiro (Zona Oeste) makes up more than 50 percent of the city area and has many historic sites. The old `Royal Road of Santa Cruz` has a diverse landscape and crosses the territory in the regions of Bangu, Realengo, Campo Grande and finishes at the Royal Palace of Santa Cruz.

Santa Cruz and Campo Grande Region have exhibited economic growth, mainly in the Campo Grande neighborhood. Industrial enterprises are being built in contemporary lower and lower middle class residential Santa Cruz, one of the largest and most populous of Rio de Janeiro`s neighborhoods, most notably Companhia Siderurgica do Atlantico (CSA), a new steel mill with its own private docks on Sepetiba Bay, which is planned to be South America's largest steel company.