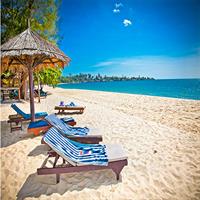 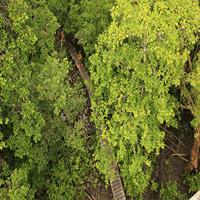 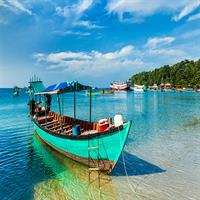 The sunny seaside destination of Sihanoukville stretches along the southwest coast of Cambodia offering golden white sandy beaches, glistening blue waters of the Gulf of Thailand with resorts, hotels, and guesthouses nestled along the shores. Explore the verdant National Parks brimming with flora and fauna, relax on the many beaches with beachside restaurants and bars, and check out the ancient temples.

Combine Hanoi (where a fascinating blend of East and West, combining traditional Vietnamese motifs with French flair offering visitors a marvelous experience), Ho Chi Minh (a place that features The Jade Emperor Pagoda; a religious place that is considered to be one of the most spectacularly atmospheric temples in this City), Sihanoukville (a province in southwest Cambodia known for its beaches, tropical islands and the mangrove jungles of Ream National Park. Set around a deep-water port on a peninsula jutting into the Gulf of Thailand, the provincial capital of Sihanoukville has palm-fringed beaches, seafood restaurants and late-night bars) and Siem Reap (a strikingly memorable place that will take you back on time and offer you a pick of the ancient Khmer civilization thanks to their many Angkor temples) with flights between cities. What a combination! This is a flexible vacation package. Select your number of nights in each city, desired hotel and activities.

Close more details
Combine the best of Vietnam and Cambodia, including beaches!
Included:
12 nights from $1,588*

Sihanoukville
Map of Point of Interest

Browse all 41 customizable packages  or  Build Your Own Itinerary