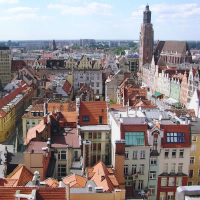 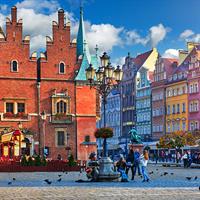 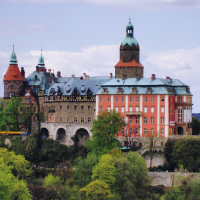 Wroclaw is the economical, cultural and intellectual capital of Lower Silesia. The city with its charming historical center, parks & good restaurants is a pleasant place to visit. Wroclaw Town hall is considered one of the most splendid Gothic buildings in central Europe. In Wroclaw you can also see the biggest baroque interior in Poland, which has remained untill today - the Leopoldine Hall, located in the 17th century University building. Don't miss the Ostrów Tumski, where one of the most beautiful sacral architecture buildings in Europe has been preserved.

Germany and Poland Combine Berlin (a cultural capital; art, theater, opera, dance - there is no shortage of activities here), Wroclaw, Krakow (a southern Poland city near the border of the Czech Republic, is known for its well-preserved medieval core and Jewish quarter) and Warsaw (a wealth of shops and restaurants in the painstakingly reconstructed Old Town) with the EC and IC Trains. This is a flexible vacation package. Select your number of nights in each city, desired hotel and activities.
Included:

Close more details
Venture through Europe in this once in a lifetime trip trough Poland. Start in Warsaw a capital city is on its rebirth. Old Town was faithfully rebuilt, brick by brick, in the aftermath of the war, according to paintings, photographs, architectural sketches, and personal memories. In 1980 UNESCO included the Old Town on its list of World Cultural Heritage sites. Continue by train to Krakow (an important cultural, historical, educational and commercial center), next visit Wroclaw known for its Market Square, lined with elegant townhouses and featuring a modern fountain. Also on the square is the Gothic Old Town Hall, with its large astronomical clock and finally take a train to Gdansk one of Poland’s most beautiful cities, located on the Baltic Sea area. This is a flexible package. Select your number of nights in each city, desired hotel and activities.
Included:
9 nights from $1,164*

Wroclaw
Map of Point of Interest

Browse all 49 customizable packages  or  Build Your Own Itinerary